Why ensembling works: The intuition behind Opendoor’s home pricing 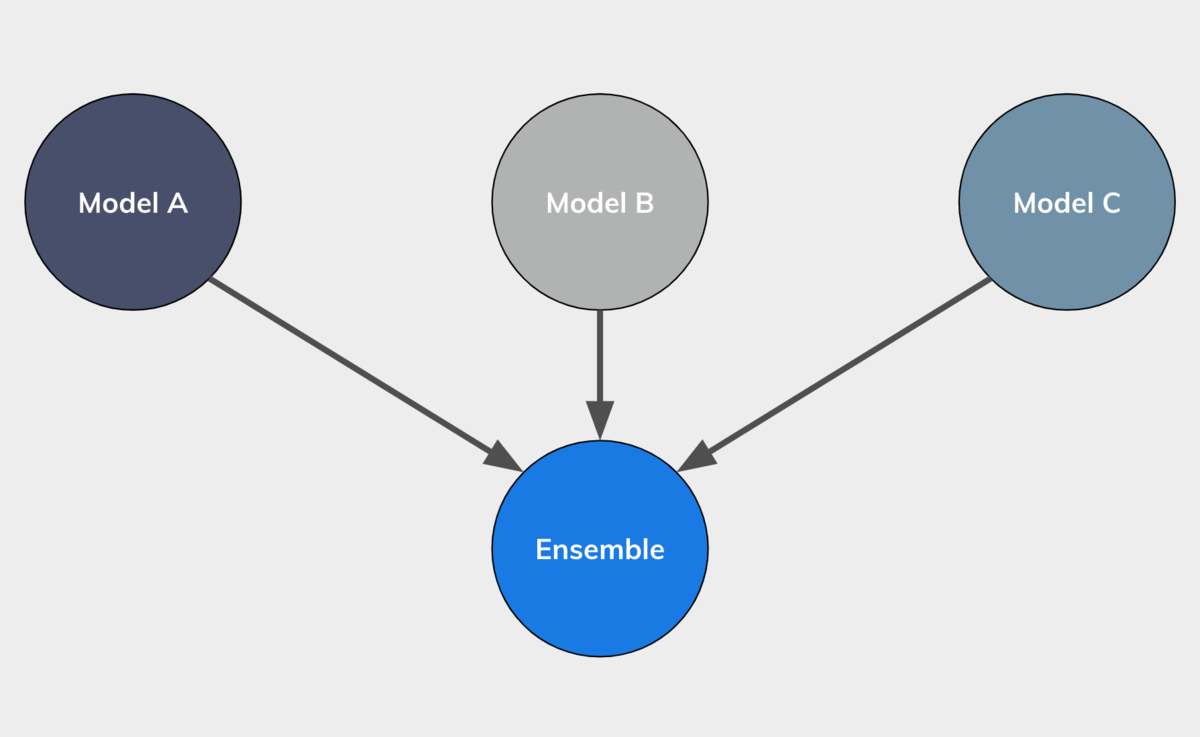 At Opendoor, we leverage machine learning to price homes that customers sell to us. Because we make real offers on homes worth hundreds of thousands of dollars, it is critical that our models make accurate price estimates.

A popular way to improve model accuracy is to build multiple models and then compute a weighted average of their estimates. For example, if one model says that a home is worth $295K and another model says the home is worth $305K, we might average the two estimates together to make a final estimate of $300K. This approach is called ensembling.

When it comes to improving accuracy, ensembling is effective. What is probably most surprising is that adding a new model to the ensemble usually helps even if the new model is inferior to all of the original models.

If our models were people

The simplest way to think about ensembles is to imagine that you are in a meeting with two real estate professionals. Both are trying to guess how much a home is worth, and it is your job to reach a conclusion. Amy is smart and has a lot of experience, and she thinks the value is $230K. Bob is newer and doesn’t know as much, and he thinks the value is $220K. Who is closest to the actual market price?

Amy is more likely to be accurate than Bob, but you probably shouldn’t rely only on her answer. Even though Bob doesn’t know as much, he brings a new perspective. Maybe he notices something about the home that Amy has missed. The best thing for you to do is to compromise between the two estimates. Since Amy has more expertise, you should put more weight on her estimate, so that your compromise comes closer to her, maybe around $227.

In some sense, Amy and Bob are both “models”. By choosing a price that is a weighted average of their estimates, you are acting like an ensemble model and will tend to make better decisions. Of course, this approach won’t always lead to better decisions. Sometimes the best answer may have been much closer to Amy’s estimate or closer to Bob’s estimate, or perhaps even more extreme than either one of them. But on average you will tend to make better decisions if you factor in both of their beliefs than if you only pay attention to one.

Putting some numbers to it

Let’s test this with some real numbers. Imagine you have two models, A and B. Sometimes the models make estimates that are 5% too high and sometimes they make estimates that are 5% too low. There is no correlation between the errors of the models. That is, whenever Model A is too high, it is equally likely that Model B will be too high or too low.

As you can see in the table above, these models will on average both be 5% off of what we estimate the market price to be.

Even if you made one of the models slightly worse, for example by turning all the 5’s into 6’s in Model B, the Ensemble would still outperform either model alone, which helps explain why introducing an inferior model can sometimes help. Of course, at a certain point, a model can become so bad that it does more bad than good. But in most cases, adding a new model tends to help.

A final way to explain ensembling is with graphs and a little bit of linear algebra. 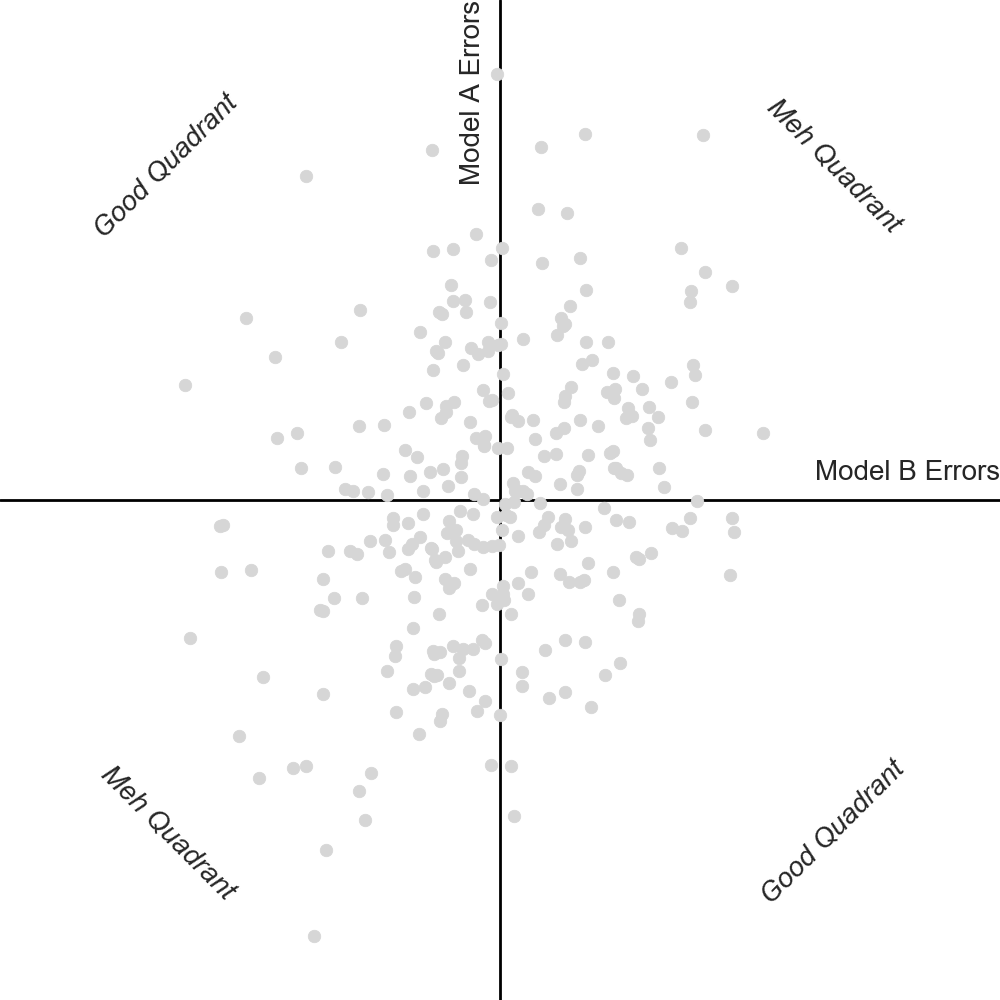 Now look at homes in the top left quadrant. For these homes, Model A gave a positive error and Model B gave a negative error. Because the errors largely cancel each other out, these homes benefit a lot from ensembling. That’s why we call this quadrant the Good Quadrant.

A similar story plays out in the bottom two quadrants.

Quadrants are a useful way to think about this, but to be a bit more precise we need to use a little bit of linear algebra. When you compute an average of two values, you multiply each of the values by 0.5 and then you add them up. One way of thinking about this is that you are taking a dot product of the vector of values with the averaging vector [0.5, 0.5]. And a good way to think about a dot product is that it is proportional to a projection of one vector on to the other. Without getting into the details too much, an average of two numbers is equivalent to 71% of the projection on to [0.5, 0.5]

To show how this plays out graphically, the plot below shows the averaging vector ([0.5, 0.5]), which points to the top right. We have also highlighted one of the homes in dark. For this home, the error from Model A was positive, and the error from Model B was negative. The average of the errors (i.e. the error of the ensemble) is proportional to the projection of the home onto the averaging vector. The projection for this example home is shown as the pink vector pointing to the top right. Notice that it is very small, meaning that the ensemble error for this home (0.091) is also small. 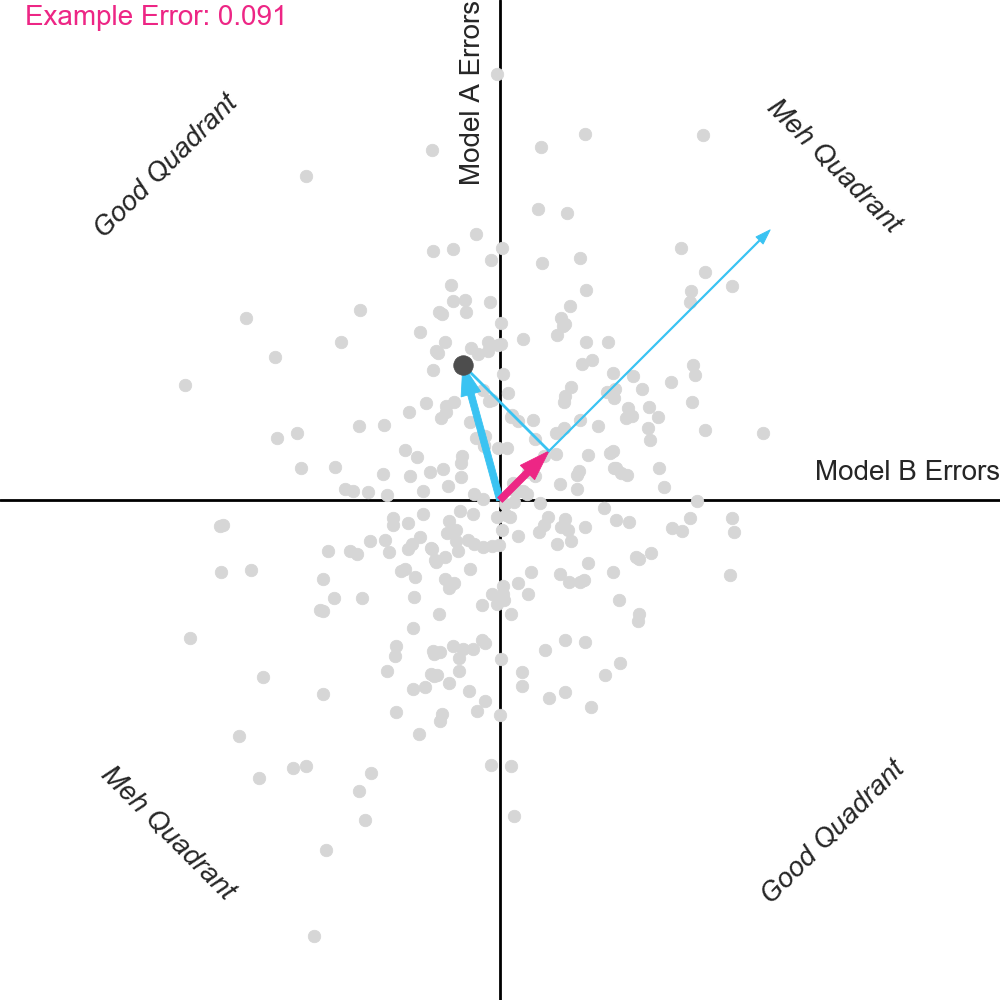 Why is this happening? The dots in the top right quadrant represent homes on which Model A had positive errors. If you have another model value these homes it’s likely that this other model will have lower (less positive) errors. While a minority of homes might obtain even higher error from the second model, most will get lower error. And critically, the less correlated the second model is with Model A, the bigger the magnitude of this delta, and the bigger the benefit of averaging.

That’s why at Opendoor we strive to use models that are minimally correlated with each other.

Ensembling has always been core to the way Opendoor approaches the very hard problem of valuing a home sight unseen. One way we use multiple “models” is through our hybrid pricing approach, where we have both automated and human-led valuations on a significant fraction of offers. This allows us to scale rapidly while maintaining the accuracy required to deliver a great experience to our customers.

We have also built infrastructure to allow data scientists to prototype, backtest and efficiently implement new valuation models. Among all the models we currently use in production, some of them even have sub-components that are ensemble models themselves!

If you’re interested in building new models and helping people move rapidly and freely, you should consider joining our team.